Award for Excellence in Nutrition Care

Nutrition Professionals Australia have great pleasure in presenting an annual Award for Excellence in Nutrition Care in honour of the late Gwen Kelsey. 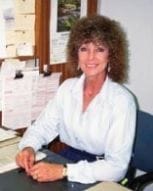 Gwen was a Dietary Aide based in the hospital setting and devoted her working life to helping individuals to improve their nutrition. She always found innovative ways to present foods so that people enjoyed their meal and ate more.

The Award for Excellence in Nutrition Care is intended for individuals who are currently working with older people either at home or in an aged care facility.

The successful person may be a cook, chef, catering manager, carer, nurse or manager.

Some or all of the following criteria will be used when deciding the successful applicant:

Innovation in delivery of nutrition care

The overriding criteria is the principle of exceptional quality.

Applicants can nominate themselves or can be nominated by others using the nomination form.  Nominations to be received prior to 30th June 2015.

Please include a copy of your CV. 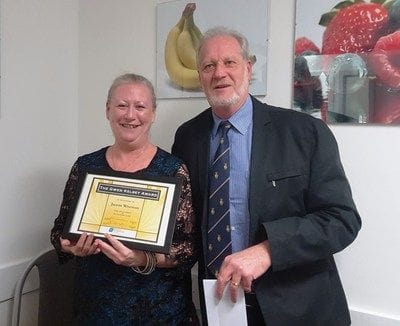 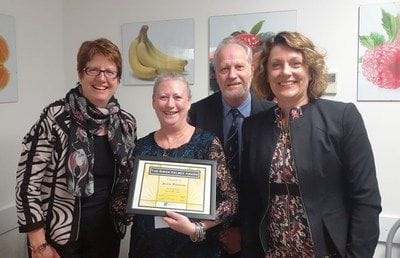 'Imagine yourself 960 kilometres from Adelaide, 536 kilometres from Port Augusta and 688 kilometres from Alice Springs. You are in the Opal Capital of remote Coober Pedy.  With an additional journey of only 1.1 kilometres, but 8 years in the undertaking, you have reached Tjilpi Tjuta Kanyini Umoona Aged Care Aboriginal Corporation. This is one of only 29 Indigenous specific, purpose built residential aged care facilities in Australia funded through the Commonwealth National Aboriginal and Torres Strait Islander Flexible Funding program. It is a small facility, funded for 22 places with 14 residents and 25 HACC clients, and from 2002 to 2009, provided its meals from this tiny kitchen which allowed room for only the cook to safely work.'

In consultation with elders and the residents, Jacene implemented major changes to the food service systems and equipment to improve the delivery of nutritious foods that are culturally appropriate.

'Working in culturally sensitive and specific environments has taught me to listen first.  Meeting the needs of others is my business imperative and sharing my skills and knowledge to best advantage is a value added outcome.  The Elders were clear in the 2010 Strategic Planning Consultations that Umoona Aged care is their home now and they choose to sit down here. The journey for them, like many other small specialist services, has been a convoluted one tinged with sorrow, delay and frustrations.  Without their dedication, support and determination, there could not have been the progress, quality and evolution of service excellence to the level now demonstrated.

Recognition of this is evidenced by Umoona Aged Care being awarded the Palliative Care Council SA Award for Aboriginal Palliative Care and Teamwork Award in Palliative Care in 2013... With bringing our Elders together under one roof, rebuilding the meals services, supporting innovation through the CompactServ purchase and allocating resources to create a three person team with a designated leadership role we have achieved a significant improvement in the health and wellbeing of our community, clients and residents.' 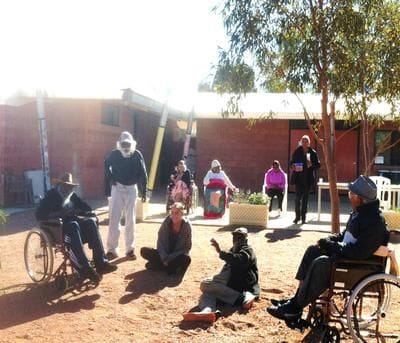 For the first time, NPA has also awarded 2 Highly Commended Awards to Gavin Tucker and to Derrick Reed, both from the Widden Group in NSW. Congratluations to Gavin and Darren for their innovative approaches in improving food acceptance and nutrition care in their care homes. 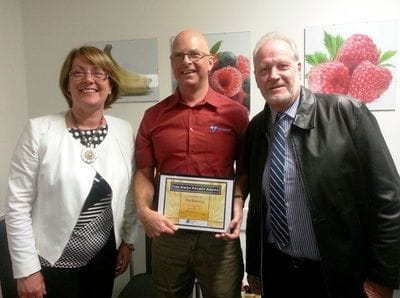 Phil Downing, Head Chef at the Homestead Walkley Heights is the 2014 winner of the Gwen Kelsey Award for Excellence in Nutrition Care.

Phil has been the Head Chef for Whelan care at the Homestead at Walkley Heights for the past 9 years. His previous experience includes Hotel, Restaurant and Aged care in Australia and overseas.

After attending Nutrition Professionals Australia's Nutrition and Special diets seminar, Phil says: "I was made aware of improvements which should be made for our residents. Especially those on modified diets or requiring extra nutrition." With the full financial support of his Employer (who is food focused and also took meal times seriously) he was able to put many improvements in place.

Some of the changes which took place in the next few months included
detailed menu choices for all diets
fortification of meals
providing extra homemade high energy snacks
colour coding of residents' trays
Making residents' likes and dislikes easily visible while plating meals.

Phil brings his professionals skills as a Chef to the aged care sector by providing nutritious and well-presented meals for the residents. He recognises the important role of food both as a positive experience and as a source of nutrition.Phil works closely with the other food service staff and has been a valuable resource.  He has provided guidance and suggestions and is always looking to improve the food service.

His personal goal was as far as possible to give all resident on modified diets the same meal choice as those on a normal diet. This involved at times some creating thinking.

The winner of the Gwen Kelsey Award for Excellence in Nutrition Care for 2013 is Wheatfields Aged Care. Wheatfields is a facility in Freeling in the Barossa Valley and has demonstrated the key principles that Gwen always aspired to.

Wheatfields looked at revamping the kitchen area and the practices in the Kitchen. They surveyed residents to ascertain what it is that they would like on their menus. One of the things that the residents said they missed the most was home-made cooking: cakes and biscuits in particular. They had also noticed that the residents always loved the cooking which was brought in on the Lutheran 'ladies' days'. Wheatfield's staff recognised that residents had previously enjoyed these home-made cakes and snack items. Following a cooks' Innovation Meeting the facility decided to try to reduce the amount of bought cake into the home. As a result, changes were made and each week, the cook was allocated time to bake foods that the residents had previously enjoyed. One of the staff allocated to this task is a qualified pastry chef.

This initiative has proven to be very successful and residents often ask for seconds. The staff also love to do the cooking and this has improved their morale as they are allowed to produce cakes of their choosing. They are not just cooking the meals for the day. Overall this has been a significant improvement for Wheatfields which has benefitted both residents and staff.

From a nutrition viewpoint, it has been identified the level of weight loss has now reduced to less than 10% in the facility. We know that malnutrition is a significant risk for residents in aged care. The Wheatfields initiative has made a difference to residents' health and quality of life. This has been an innovative simple approach which has been effective in increasing the nutrition of residents.

Wheatfields was awarded the certificate and prize by Mr Gary Kelsey (Kitchen Manager - Lyell McEwen Hospital) at a special awards ceremony in the Nutrition Professionals Australia's North Adelaide rooms. Gail Harding (Director of Nursing and 3 of the chefs at the facility attended the presentation).

Congratulations to Rodney Hodge for winning NPA's inaugural Award for Excellence in Nutrition Care in memory of Gwen Kelsey.

Rodney is a most worthy winner of the award. He currently works as Support Services Manager of Edlercare Seaford. He has had a varied career - starting in restaurants, in hospital kitchens then in aged care. Rodney first started in health care working as a Chef at Flinders Medical Centre. He then moved to aged care with Uniting Care Westminster Village as Catering Manager for 3 years with Spotless. He moved to Masonic Village Somerton Park with Medirest as Chef/Manager for 18 months before moving to Eldercare.

Rodney was selected for the award as he demonstrates the values that Gwen lived by: every mouthful counts. Rodney stated that he considers that his position is 'a way to give our elderly community something back in return for what they have done for us'. He also said that he noticed when he first started working in aged care that residents really look forward to their meal times, except for residents on modified diets. These residents also have a lot of food supplements to enhance their health. He started working on different ways to serve the food so these residents could at least see that their meals have been presented in a way they would want to eat it.

He had challenges with equipment and limited resources as with most aged care facilities. Molds and equipment were expensive and it is hard to get facilities to spend money to do this. He found that piping the vegetables and making different styles of pates made from different meats was something he could easily do with minimal costs. In these meals he found he could then add bran, eggs, cheese and different vegetables in with the meat choices to get as much nutrition into the resident's meals in one sitting. Residents on modified diets will quite often miss meals so Rodney believes that you need to get as much into them when they feel like eating. He said that he is always looking in shops for different molds and equipment to offer residents something different and some variety in their diet. He uses fresh ingredients and rarely uses ready made products.

Janet King was the inaugural winner of NPA's Award for Excellence in Nutrition in memory of Gwen Kelsey.

Janet is a most worthy winner of the award. In 2010 she was working as Hospitality Service Coordinator at Regency Green Aged Care Facility. Her career has spanned over 30 years, with hospitality being the primary focus. Janet has always endeavoured to provide well balanced and nutritional meals to residents to keep them healthy and happy. Janet was selected for the award as she demonstrates the values that Gwen Kelsey lived by: that every mouthful counts. She works in a challenging environment, with multiple cultural requirements, the usual dietary requirements and a decentralised cook chill system. Janet works diligently to achieve the best for her residents, from bringing in special food for multicultural days, to printing large print copies of the menu to place behaind the residents' doors so that they know what is coming up next.

Janet has attended NPA's 2 day Nutrition and Special Diets in Aged Care Seminar and has implemented a number of initiatives in her facility to improve nutrition care. She inspires others to achieve more. She is caring and compassionate and a worthy recipient of the award.